We use cookies to enhance your experience and better serve you. 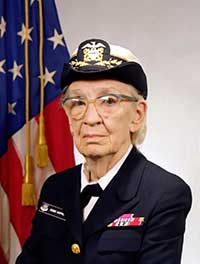 Grace Hopper (1906-1992) was an American mathematician and rear admiral in the U.S. Navy and a computer technology pioneer. She helped devise UNIVAC 1, the first commercial electronic computer, and naval applications for COBOL (common-business-oriented language), one of the first widely-used computer programming languages, and for many years the most popular language in the business community. She was nicknamed “Amazing Grace” and is often referred to as the “mother of computing.”

Born in New York, New York, Hopper graduated from Vassar College in 1928, and earned both her M.A. in 1930 and her Ph.D. in 1934 from Yale University, then returned to Vassar to teach mathematics. In 1943, she joined the Naval Reserve as a lieutenant assigned to the Bureau of Ordnance’s Computation Project at Harvard University where she worked on Mark I, the first large-scale automatic calculator and a precursor of electronic computers. She wrote the first computer manual, A Manual of Operation for the Automatic Sequence Controlled Calculator in 1946, which described how to operate Mark I and essentially how to program a computer.

She remained at Harvard as a civilian research fellow while maintaining her naval career as a reservist. After a moth was found in Mark I circuits, her team coined the term “debugging” to refer to fixing computer failures.

In 1949 Hopper joined the Eckert-Mauchly Computer Corp., where she designed one of the first compilers (and also coined the word) which translated a programmer’s instructions into computer codes. As head programmer, she worked on the design of UNIVAC I and remained with the firm when it was taken over by Remington Rand (1951) and by Sperry Rand Corp. (1955).

In 1957 her division developed Flow-Matic, the first English-language data-processing compiler which had many features that inspired the development of COBOL. Her development of compilers for COBOL and her strong advocacy of the language led to its widespread use in the 1960s.

Naval Reserve regulations required that Hopper retire at age 60. So, she retired from the Navy in 1966 with the rank of commander, but she was recalled to active duty the following year to help standardize the navy’s computer languages. She was promoted to commodore in 1983, and that rank was incorporated into that of rear admiral in 1985. She retired (involuntarily) from the Navy on August 14, 1986, a few months before her 80th birthday—and was at that time the oldest officer on active U.S. naval duty

After leaving the Navy, she served as a senior consultant to Digital Equipment Corporation, until her death at age 85. Grace Hopper passed away on January 1 1992 and is buried at Arlington National Cemetery.

In 1969, she was awarded the first ever Computer Science Man-of-the-Year Award from the Data Processing Management Association.

In 1971, the Sperry Corporation initiated an annual award in her name to honor young computer professionals for their significant contributions to computer science.

In 1973, she became the first person from the United States and the first woman of any nationality to be made a Distinguished Fellow of the British Computer Society.

The U.S. Navy Destroyer USS Hopper, launched January 6, 1996, is only the second US Navy Warship to be named after a woman within the Navy’s own ranks.

She received the Presidential Medal of Freedom posthumously in 2016.

In September 2017, Yale renamed Calhoun College and dedicated the residential Grace Hopper College in New Haven, in honor of the pioneering Hopper’s contributions to mathematics and computer science.

In October of 2020, the U.S. Naval Academy officially opened Hopper Hall, the academy’s new center for cybersecurity studies, named in her honor.  The cybersecurity facility is the first building named after a woman at the three main service academies.

Read this more colorful biography of Amazing Grace: https://amazingwomeninhistory.com/amazing-grace-hopper-computer-programmer/ or this accounting of her life and career in the Old Salt Blog: http://www.oldsaltblog.com/2021/03/on-international-womens-day-1-honoring-admiral-amazing-grace-hopper/